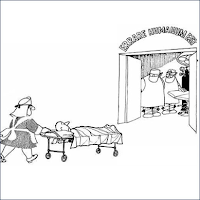 The well-being of doctors is an issue that has a direct impact on the quality and quantity of care that healthcare systems can deliver to society. You only need review several of the entries of recent months and certain articles that even quantify the cost and waste that burnout implies for healthcare organisations. As has been shown in these articles, organisational factors, workloads, alienation from the values of organisations and professionals, the autonomy of professionals to manage their work, and even the type of clinical information management programs and their usability affect professional well-being.

In various forums for patients and professionals, there is agreement on the need to promote an experience that does not dehumanise the patient in his or her interaction with a health system that tends towards the industrialisation of care processes. It is known that to increase the efficiency and reliability of healthcare processes, a part of them, approximately a third, can and should be industrialised as far as possible, and that this would benefit patients and the system, and also professionals.

But even the most competent, caring and resilient professional can fail in an infallible system.

The emotional reaction after making a medical error can be very varied. It depends on the impact of the mistake and, above all, any legal proceedings following the event that can also condition professional practice. A recent article reviews all the spheres of involvement of professionals regarding clinical judicial syndrome, described by Dr Hurtado-Hoyo, with the purpose of highlighting the need to organise psychological care for doctors who have experienced the ‘bench penalty’. The consequences are varied, as described in the article by Dr Arimany et al., which highlighted that 80% of the professionals evaluated after a lawsuit present a significant emotional reaction in some situations. In extreme cases, the impact can lead to the suicide of the affected professional. Those who have read Paul Kalanithi's When Breath Becomes Air will remember the surgery resident, Paul’s colleague, who ends up committing suicide after failing to overcome the impact of the death of a patient from a medical error. Some papers collect this variety of reactions, among them the famous defensive medicine, which established in many of the things we do for no clinical reason, as Dr Vallejo recently hihglighted in his post. A search for "malpractice and defensive medicine" yields 2,450 articles in Scholar Google from only 2018 to the present, and in some of them, it explains how the practice of defensive medicine slips into teaching.

Recently, the BMJ published an editorial, Abandon the term "second victim", which has generated controversy regarding the advisability of using ‘second victim’ to describe professionals involved in a malpractice case in which the patient has been the primary victim. Some of the co-authors belong to organisations such as Mothers against Medical Errors or Citizens for Patient Safety. The arguments they cite relate to the system's or the professionals' lack of accountability when an error has been made. The exculpation occurs because the fault is of the system, thus diluting the responsibility of those directly involved in the process/procedure. Furthermore, it is argued that professionals, by calling themselves the second victim, appropriate the suffering that belongs the patient and the people close to him or her.

The responses to this article, which can be reviewed, are varied. It has to be noted that denying the doctor's right to an emotional reaction, both to the negative consequence of the patient intervention and the fear of the consequences derived from his or her professional practice, supposes an act of dehumanisation of the professional by society. And, for the system, changes in the behaviour of a professional, turning predictably towards defensive medicine, mean moving away from good professional practice. From the Praxis Area of the Barcelona College of Physicians, Dr Gómez Durán also responded to this article and BMJ has published her response. The term second victim may be more or less appealing, but it has brought to light the impact of a situation so complex that it involves obtaining the opposite result to that desired with medical intervention, and has created an awareness of the need to address it. Additionally, despite the appearance of the term second victim, initiatives aimed at improving patient safety have continued to grow and, therefore, this has not been a reason for relaxing the safety policies of health institutions.

Thus, while considering the ongoing debate, we ought to have a sound psychological support system in place for those professionals who may be involved in legal proceedings that may negatively impact their professional practice, the quality of their interventions or even interrupt their professional activity. And it is the case that the suffering of patients as victims is not exclusive to them, nor should it preclude that the professional also suffers. However, I think it is even more relevant to combat both the defensive medicine we practice, because of this fear of litigation, and the things we do for no reason. Lastly, I believe it is fair to assert that the humanisation of clinical care is bidirectional between its two protagonists, based on trust and on an understanding of uncertainty and fallibility, without ceasing to demand safer work environments and processes that minimise the possibility of error.
at 08:00 1 comment:

The same challenge in Sao Paulo, Dallas and Phoenix: how to reduce unwarranted clinical variability?

Triple Aim, Right Care, Less is More, Nothing with Me without Me, Lean are concepts, principles and methodological approaches that are increasingly present in healthcare institutions and which we frequently discuss in the posts on Advances in Clinical Management. All of them aim to make better use of resources and allocate them to what adds value to the patient, thereby advancing sustainability, quality and safety. While it is clear that this is the way, the real challenge is how to put it into practice in each of our institutions. And so it is essential to read and travel to learn from other institutions.

With Amazon, there is no going back


A winter desert. The author discusses his post with friends: "The future of medicine is changing daily, but the point of no return will be when Amazon enters the healthcare market ..." 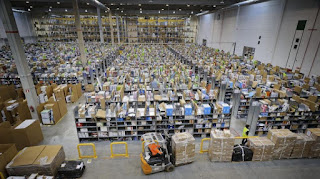 I noticed the smile on my friends' faces when I made these comments to them. I do not have enough scientific relevance to lavish myself in informative talks, so my remarks were in opinions of the same level as those referring to what Atletico will do if it does not qualify for the Champions League. They thought it was an exaggeration and that the medicine was indeed changing a lot, but no so much.

A large group of European and North American surgeons have published in Annals of Surgery a review of the difficulties of centralising complex surgery around the world. The complex issue has multiple actors, starting with governments and respective funding models and continuing by the hospitals, the doctors involved and their corresponding scientific societies. It is surprising, however, that patients rarely appear in such discussions.

Some proposals to reduce the things we do without reason


Reducing unnecessary tests and treatments in our organisations can be a complicated task, especially in its implementation. To facilitate its development, and in line with the previous reflection on the search for things we do without reason, we have new references that can serve as support. 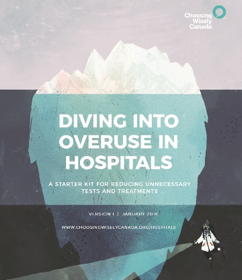 Canadian Choosing Wisely's Diving into Overuse in Hospitals campaign aims to sensitise institutions to participate in this analysis by making changes (small or large) to reduce this excessive use. On their website, professionals have access to a large number of resources such as a "starter kit", webinars and other exciting supports.

Disruption doesn't show on the tip of the iceberg

By chance, a couple of years ago, I found some images of Gediminas Pranckevicius, a Lithuanian graphic designer. Some of these images present a (small) upper part in which he describes familiar scenes, but the rest of the image (the lower part) is very complicated. The metaphor is automatic: there is (extraordinary) life in the submerged part of the iceberg.

Disruptive changes take place in the submerged part of the iceberg that, in a short time, change the image of the visible surface. Taxi is a service that is changing in a profound way. The digital press also gives us some clues. In New York, it appears that there are ten times more alternative taxis than conventional taxis, which has caused a decrease in the income of taxi drivers (by almost 30%), a reduction in the value of licenses and a negative impact on traffic due to the large number of vehicles that circulate without passengers. It's a significant problem from many points of view, and the most impressive thing is that these profound changes have taken place in less than five years.

In search of the things we do without reason

In healthcare, there is usually a special appreciation for tradition or antiquity, which does not always translate into better clinical care. The reality is that there are things that we professionals do without the contrast of adequate evidence or, simply, without these actions providing sufficient value.

The Choosing Wisely initiative was launched a few years ago from a private North American institution. It was necessary to suggest to the scientific societies of that country the development of recommendations on clinical practices that both doctors and patients should rethink.