In 2014, Ryan Meili, a Canadian family doctor, wrote a provocative article criticizing the health promotion policies implemented since the 1970s in most developed countries. With the title "Improving our health is about more than diet, smoking and exercise", Meili reviewed the determinants of a population’s health.

As is known, among the elements that determine  population’s health, health care is the least important when compared to the weight of social factors such as, for example, income and distribution, education, housing, employment or the social support available to the individual. Although the importance of these factors is evident, and although study after study has shown the differences in health caused by social inequalities, health policies continue to be largely committed (and budgetary priorities demonstrate this) by allocating available resources to improve health care of the population, often forgetting the other factors that are also determinants. 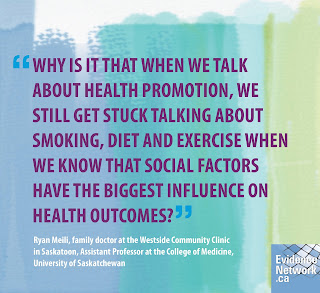 Health policies that have tried to go beyond just investing in health care have focused mainly on preventive medicine through vaccination and screening programs and on health promotion, but only as measures to avoid disease, not as measures to improve health outcomes.

In addition, when we talk about health promotion, we often speak only of three elements, which Meili calls the "Holy Trinity" of health promotion: tobacco, diet and exercise. That does not mean that these three factors are not important; surely quitting smoking is one of the best ways to improve health and increase life expectancy individually. The problem is that while we address these individual factors we don’t face other factors that have a significant impact on the population’s health. In fact, some authors have even claimed that the health promotion measures that we have been developing in recent years may favour health inequalities as they tend to have more incidences among the more educated population and they surely need these measures less. This factor would fully coincide with the inverse care law of Tudor Hart, which says that medical or social care tends to vary inversely according to the needs of the population served.

Health promotion campaigns tend to influence what is easier: the measures the individual can take to improve their health, and obviate what are more difficult: try to change the context in which that individual is. For example, in a poorly controlled diabetic person it’s much easier to increase his medication and blame him for his inappropriate diet than to try to change the socioeconomic measures deny him access to a balanced diet.

Meili ends his article with a phrase that should make those responsible for health policies think: "Talking about individual decisions without taking into account the socioeconomic circumstances in which they are taken is the simplest way to keep people ill".
at 08:00