Overdiagnosis: in relation with pulmonary embolism

In the graph below, taken from the article, you can see the behaviour of the incidence of pulmonary embolism in relation to mortality, both population-based, comparing the 1993-1998 period, prior to the introduction of CTPA, with the subsequent one. The overall incidence (bright blue) includes all patients admitted to the hospital for any medical or surgical circumstance. The percentages represent average increases for each year (APC: Annual Percentage Change). 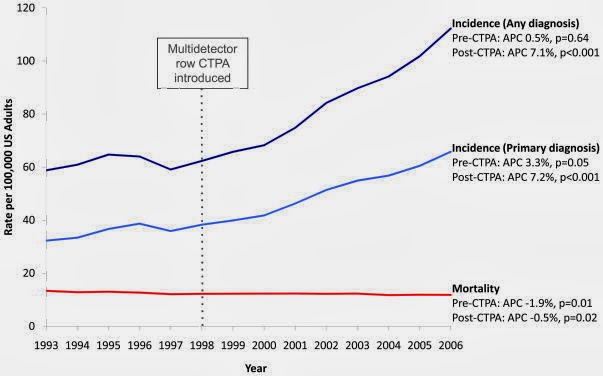 How to diagnose overdiagnosis

In a BMJ editorial, within the framework of the campaign "Too much medicine," Professor Paul Glasziou and editor Fiona Godlee, among others, spoke of the phenomenon of overdiagnosis and analysing their characteristics, and since this is a trending concept, I think it's a good idea to pay attention to it.

In a medicine previous to cancer screening programs as we know them today, people were diagnosed according to the appearance of the first symptoms. It was the visible tip of the iceberg. But as it was suspected that when the symptoms appeared, the illness simmered below the clinical perception for long time, it was believed it was necessary to develop diagnostic techniques to allow seeing the iceberg below the water, with the assumption that the sooner the pathological process in motion is detected the sooner is possible to act, therefore obtaining a better prognosis.

But now we can see that things did not fully go as intended. In general, we can affirm that thanks to screening programs forecasts have improved, but unfortunately the mortality rates are the same, and voices criticizing this rummaging through the invisible parts of the iceberg, have enough arguments to defend that while early diagnosis may detect many cases that perhaps wouldn’t have emerged at all, this is done at the expense of improving survival rates in an artificial way.

In last week’s post, I was showing you the benefits of coordination and the difficulties of integration but only in terms of organizational models, of course. However, now I believe it’s time to enter another innermost level, the clinical process, and for this reason I want to emphasize that regardless of models, aligning care objectives is the key step to improving clinical outcomes. To illustrate what I mean, I thought of an example. Imagine an emergency doctor responding to a person suffocating and, as it can not be otherwise, his goal should be in reducing the clinical problem and helping the patient to recover his normal breathing as soon as possible. But if it turns out that the patient is a complex chronic, the issue is that the doctor should also bear in mind that his action should be performed by the wagnerian chronicity model: What are the circumstances of this patient? Does he live alone? How many relapses has he had lately? Is there a professional team that takes care of him continuously? Can I contact them? From the answers to these questions will depend that the undertaken actions after diuretics and oxygen, are really effective and that the system holistically is able to improve the quality of life of that person.

For those who are not used with the terminology and with the concepts of chronicity, allow me a brief reminder of the model "Chronic Care Model" attributed to Edward Wagner, Director Emeritus of McColl Centre for Health Care Innovation:

Hospitals are structures with a powerful influence on the overall health system. Its effectiveness in solving certain acute health problems, especially in the surgical area, gives them a major social prestige. However this fact should not undermine two structural problems that are weighing their image down:

a) The first problem is internal. The own bureaucracies are showing signs of fatigue and this affects the service quality, especially when it comes to the safety of admitted patients.

b) The second problem is relational. The hierarchical superiority of hospitals has placed them apart from the communitarian reality and the primary care, and causes now a serious difficulty in dealing, in an integrated manner, with the complex chronic disease care and with the geriatric frailty.

Teaching the patients to pose a timely question

How can cancer patients get more engaged with their care? http://t.co/KWOy1zTR7N #patientengagement
— Peter Ubel (@peterubel) December 18, 2013

Peter Ubel is a doctor by profession and a researcher at Duke University in North Carolina, primarily in human condition and its relation to health, happiness and generally the way in which society works. He is the author of "Critical Decisions".

I chose this tweet because it leads to a blog of the Cancer Today, journal of the American Association for Cancer Research which states that posing the right question can help patients suffering from metastatic cancer to understand the risks and benefits of the treatments and to more appropriately formulate their personal goals. Palliative chemotherapy may improve the quality of lives for metastatic patients, but once the cancer spreads, the treatment decisions are increasingly complex, the conversations between doctors and patients are increasingly emotional and in such a delicate environment, the statistics may even mislead.